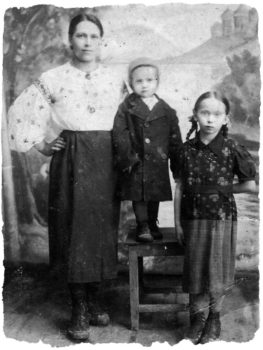 Raj, Poland… 1943 – Tatyana Kontsevich was living on a farm in the village of Raj, Poland (now Ukraine), with her teenage daughter, Anna, and her young son, Henyo. Her husband had been picked up for forced labor shortly after the Germans occupied Raj. In autumn 1941, Tatyana met Zeev Shutenberg, a Jewish truck driver. Zeev asked Tatyana for food and despite her difficult situation, she invited him to her home for a meal.

In July 1943, a month after the liquidation of the Berezhany ghetto, Zeev again appeared in Raj; this time with his wife, Malka, and asked Tatyana to hide them. While sheltering Zeev and Malka, Tatyana acted as an intermediary between the couple and Malka’s sister, Chana Redlich, who was hiding with her parents and her son, Shimon, in the ruins of the Berezhany ghetto. In January 1944, when the locals began to settle in the area of the ghetto, Tatyana agreed to hide Chana, her son, and parents in her home. One night, Tatyana met Chana and her son on the outskirts of the town. Tatyana carried young Shimon on her back for the entire trip home. The following day, she returned for Chana’s parents, but found that they had been arrested and handed over to the Germans.

The Germans patrolled the area regularly and would go to Tatyana’s farm and demand food, hay, and other items. One day, when Anna was alone in the house, two Germans entered the house and demanded hay. Knowing that the hidden Jews would be discovered if the Germans took the hay which was in the attic, she burst into tears and said she needed her mother’s permission to give them the hay. Tatyana returned to the farm a short while later and climbed into the attic and threw bales of hay down to the waiting Germans, who then left the farm. The Germans did not discover the Jews who were hiding in the attic.

Tatyana and her children hid the four Jews in their home until the area was liberated by the Soviet army on July 22, 1944.

Tatyana Kontsevich died years ago. Anna passed away in 2019.