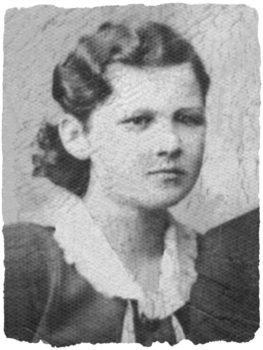 Sowina, Poland… Spring 1940 – In the spring of 1940, Abraham and Helen Krueger and their seven children – Ann, Sally, Mary, Thelma, Henry, Jean, and Edith – were forced to move from their small farm in Sowina to the ghetto in Kolaczyce. When the German Aktion against the Kolaczyce ghetto began, the Krueger family fled into the woods. They saw the Jews, including their grandmother, aunts, uncles, and cousins, being loaded onto trucks and taken away. They were taken to a forest outside of town where they were killed and buried in a mass grave.

Abraham Krueger realized that they could not survive in the woods. In the hope of saving his family, Abraham decided to split them up. Miraculously, he found kind neighbors who agreed to hide his large family. Anna and Stanislaw Kopec hid Abraham and Henry for the entire duration of the war. Sally also hid with Anna and Stanislaw at different times during this period.
When asked to help, Anna and Stanislaw Kopec did not hesitate. Abraham and Henry hid in their attic. Stanislaw had built a small hiding place for them. They showed Abraham, Henry, and Sally every kindness and shared what little food they had. The Kopecs, devout Catholics, were compelled by their beliefs to help the Kruegers.

The mother, Helen, and youngest child, Edith, lived with the Stasiowsky family for the entire war. Jean and Thelma were hidden by the Hendzel family until liberation. Ann, the eldest sister, traveled from family to family working as a seamstress. Sally and Mary spent two years hiding in the homes of different neighbors including Anna and Stanislaw Kopec, Kunegunda and Jan Fraczek, and Adela Liszka. As the war continued, it became increasingly difficult for Sally and Mary to move from place to place. In 1943 Sally and Mary, disguised as Poles, went to Germany as forced laborers.

Each of these families assumed a great risk. They knew the consequences if they were caught – death for the Kruegers and themselves. They all survived the war. After liberation, the Kruegers moved to Tarnow. Sally and Mary were still in Germany and were not able to make it back to Poland. In June 1945 Abraham, Helen, and Henry returned to their home in Sowina. They were murdered at night in front of their home by Poles.

Ann, Thelma, Jean, and Edith, the sisters who were still in Poland, buried their parents and brother and made plans to leave for America where their older sister, Ruth, had been living since 1938. Sally and Mary left Germany and also made their way to the United States. In 1947 the sisters were reunited.

Of the families who hid the Kruegers, they all passed away. Anna Kopec died in 2018.

In 2002 the JFR reunited Anna Kopec with Ann, Sally, Mary, Thelma, Jean, and Edith Krueger. The documentary retelling their story can be viewed here.