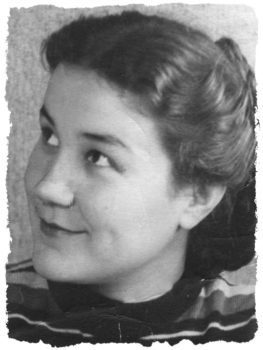 Rovno, Poland… November 1942 – Anna Lapteva was living with her sister, Natalia, in Rovno, Poland (now Ukraine). In 1941, the Jews, including Yevgenia Cherniavskaya, were forced to move into the Rovno ghetto. In November 1942, after a difficult year in the ghetto, Yevgenia managed to escape and made her way to Anna’s house. Yevgenia, who had worked with Anna’s sister, Natalia, before the war, begged the sisters for help.

Anna and Natalia decided that they could not turn Yevgenia away and agreed to hide her. This was a tremendous risk. Anna’s neighbors soon discovered that they were hiding a Jewish woman in their home. Fearing for their lives, the sisters realized that they had to find a new hiding place for Yevgenia. They gave Yevgenia money, food, and Natalia’s identification card so she could travel. They made arrangements for Yevgenia to travel to Anna’s in-laws, who were living in Vinnitsa. Yevgenia remained with Anna’s in-laws until the end of the war.

They all survived the war. Natalia Lapteva died years ago. Anna Lapteva passed away in 2008.