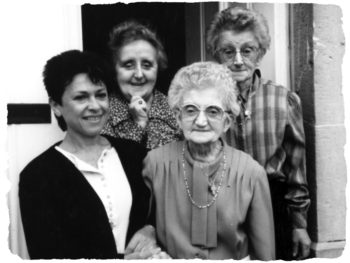 Province Namur, Belgium… 1942 – The convent in Banneux Notre Dame headed by Mother Superior Jeanne Leloup, was hiding Jewish children until informers told the Germans.  The nuns quickly hid the children in the homes of neighboring villagers.  The Mother Superior asked her three sisters, Marie, Marthe, and Marie-Therese Leloup, to hide a little girl, Mariette Bermowitz.  Since it was dangerous for single women and a child to be alone, they all lived in the rectory of Abbé Olivier Leboutte, who agreed to give them shelter.

They loved, fed, educated, and cared for Mariette in an environment filled with respect and love for one’s fellow man.  When a German officer came to the rectory, he demanded that the household appear before him.  When asked who the child was, Abbé Leboutte said she was an orphan found wandering on the road. The Abbé took it upon himself to lie, thus jeopardizing himself and the three ladies whom he was sheltering.  After the war, only Mariette’s father returned.  He was very ill with tuberculosis and extremely depressed.  The Leloup sisters helped her father after the war.  Mariette returned to live with the sisters each vacation.

As Mariette wrote: “Thus it came to pass that I was raised by these charitable ladies, given money, love, a tenacious will to survive, and so much more…These are uncommon people in a rather barbaric world and are worthy of recognition as being what God had intended all humans to be.”