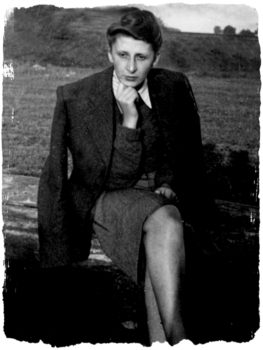 Ostrowiec, Poland… 1940 – When the Germans invaded Poland, Ewelina Lipko-Lipczynska and her five-year-old daughter, Wiktoria, were on holiday visiting Ewelina’s father, Jan Szymanski, and her sister, Wanda, in Ostrowiec.

Ewelina and her daughter spent the duration of the war there. Within a month of entering Ostrowiec, the Germans had killed twenty-seven community leaders. Jan Szymanski was a respected teacher and was determined to resist the Germans in any way he could. In 1940, when the Germans closed all Polish schools, Ewelina and her family opened an underground school.

Ewelina wrote and distributed two underground newspapers, “The Worker’s Voice” and “For a Better Future.” When the family saw what the Germans were doing to the Jews they immediately began to help their Jewish friends and neighbors.

They hid a number of Jews in their home. As the owner of the house, Jan Szymanski was responsible for keeping the official record of all occupants and was able to hide the real identity of some of the residents. Mr. Szymanski obtained forged documents for Jews who were able to pass as Christians. Those Jews who could not pass as Christians were either hidden in their home or Ewelina found them other shelter. When the family was denounced for hiding a Jewish child in their home, Ewelina fled with the child.

Ewelina, Wanda, and Jan were responsible for saving the lives of more than forty Jews. The three of them have all passed away.