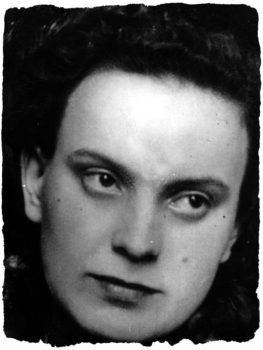 Kiev, Ukraine… September 29, 1941 – Olga Luscheyeva lived in Kiev with her mother, Anna, and aunt, Anna Altynnikova. On the night of September 29, 1941, during the round-up of the Jews of Kiev, a knock was heard on the window of their home. Genya Batasheva and Mariya Palti, two Jewish girls who were friends with Olga and whose families had known each other before the war, begged Olga for help. Genya and Mariya told them how they had managed to escape the massacre at Babi Yar.

Mariya had been separated from her family – her brother, sister, and mother. A local interpreter for the Germans who saw her, assumed she was not Jewish, and took her out of the line.  She then saw her friend Genya who had also been separated from her family. Mariya together with Genya, who both looked like Russian girls, were able to convince a Ukrainian guard and a German solider that they were two Russian girls who were grabbed in the lines of Jews being marched to Babi Yar, when they had come to say goodbye to Jewish friends.

Genya and Mariya told Olga and her family of the murder of the Jews of Kiev and that both of their families had been killed at the Babi Yar ravine that day. Olga, her mother, and aunt agreed to hide the girls. When neighbors began questioning Olga about Genya and Mariya, Olga obtained forged identity documents for both girls. Genya and Mariya left Kiev; they both survived the war.

After the war, Mariya stayed in Ukraine and Genya moved to Israel.

Olga Luscheyeva passed away in 2014.