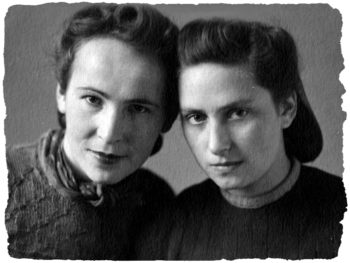 Lvov, Poland… 1941 – After the Germans invaded the Soviet Union in June 1941, they occupied Lvov, a city in southeast Poland (now Ukraine), which had been occupied by the Soviets. Ukrainian nationalists, encouraged by German forces, immediately began massacring Jews.

Sofia Lutsyshyn, who was a twenty-two-year-old Polish woman, lived in Lvov. There was no food to be found in the city, and people were starving. In order to obtain food, Sophia made the dangerous trip from Lvov to Volinsk where food could be obtained on the black market. On one of her trips, Sofia met a man with whom she struck up a conversation. The man, a total stranger, begged her to take a young woman back to Lvov. This young woman, also twenty-two years old, was Leokadya Barabas, a Jew. After taking one look at Leokadya, Sofia knew that she would help her at any cost. Sophia also knew the risk she was taking if she was caught helping a Jew.

Leokadya, whose name was considered a Polish name rather than a Jewish name, had her Polish birth certificate. However, she still needed an identity card. Sofia obtained these papers, and they returned to Lvov. The two women lived together throughout the war. Since Leokadya had papers, she was able to pass as a Christian. Over the years, they had several close encounters with German officers, but Leokadya’s true identity was never discovered. They both survived the war.

Sofia Lutsyshyn passed away in 2008.