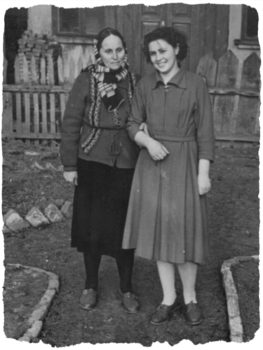 Zhitomir, Ukraine… 1941 – On a bitter cold Sunday in 1941, Emilia’s parents, Mikhail and Mariya Ponomarev, an Evangelical Christian couple, were walking home after church services when they came across a little girl on the street. The child was all alone and almost frozen. Nusia, as she was called, knew that she was a Jew. However, she had no idea what had happened to her parents.  Mikhail learned that Nusia’s parents had been murdered and that Nusia was Jewish.

The Maksimovas took ten-year-old Nusia to their home and gave her food and warm clothes. She was a very quiet child and whenever visitors came to the door, she would hide under the floorboards. The neighbors soon discovered that the Maksimovas were hiding a Jewish girl, so the family moved to another apartment. They needed to get away from those who might report them to the police. Emilia’s father obtained fake documents for Nusia, which ensured her safety while in hiding. Nusia lived with Emilia and her family until she was thirteen years old.

Emilia Maksimova passed away in 2009.