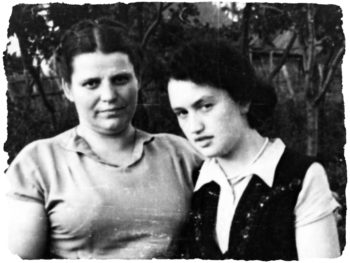 Shklov, White Russia… Spring 1942 – In June 1941, Vilia Shneiderman and her mother went to Shklov, White Russia (now Belarus), on holiday.  They were stranded when Germany invaded the Soviet Union, June 22, 1941. Vilia’s mother was killed on July 12, 1941, when the Germans entered Shklov, leaving Vilia an orphan.  A neighbor took in Vilia; however, in the spring of 1942, with Aktions against the Jews increasing, the person who was caring for Vilia became afraid of giving shelter to the Jewish child, took her to the woods and left her there.  An old woman found the scared and hungry child and took her to a nearby village.

A number of partisan units were operating in the area, and one unit asked Zinaida Kolosovskaya to care for the child.  Zinaida brought Vilia to her parents.  A little while later, Zinaida married Piotr Milto and they decided to take the child.  They registered her as an adopted child and gave her the name, Lilia.  Zinaida and Piotr sheltered Vilia until they were liberated by the Soviet army in 1944.  After the war, Vilia was reunited with her father.  Vilia subsequently moved to Israel.

Zinaida Kolosovskaya passed away in 1987 and Piotr Milto in 1998.