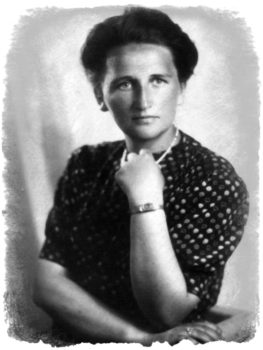 Vilna, Poland… Autumn 1943 – Jekaterina and Sergius Minkeviciene and their three children lived in a small town near Vilna, Poland (now Lithuania). Sergius worked in a sugar factory. In late autumn 1943, a stranger came to their home begging them to shelter her six-year-old daughter, Golda. Jekaterina agreed to take the child.

Late the next night, Golda was brought to their home. She was malnourished, very sick, and in need of a physician. The family, too afraid to call a local doctor, went to the ghetto and bribed the policeman, saying that their own children were sick and needed a doctor. The policeman let a Jewish doctor from the ghetto go to their house to care for Golda. The Minkeviciene family took care of Golda as if she was their own child.

Early in 1944 all the workers in the sugar factory were sent to Germany. The Minkevicienes and their children fled to the village where Sergius’s father lived. They hid Golda in a barrel, which they took with them on their cart. At the end of that summer, the Germans occupied the house of Sergius’s father and the family was forced to flee again. For some months they lived in bunkers in the forest. When the Russians approached the village, the Germans began to kill all the peasants. Jekaterina, Sergius, and the children fled again. Golda remained with them the entire time.

After liberation, the Minkevicienes learned that Golda’s family had been killed. Jekaterina believed that Golda should be raised in a Jewish family. They approached Dr. Goldberg, a Jewish physician who had survived, and asked him to take care of the child. He adopted Golda and they left for Israel.