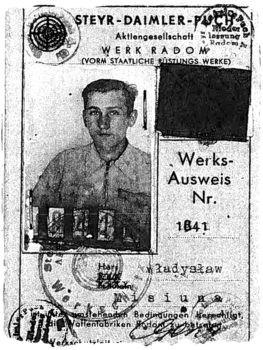 Radom, Poland… June 1943 – In June 1943, as the Germans were liquidating smaller ghettos, a group of Jews was sent from the Sandomierz ghetto to Radom. Included in this group were Sara Marmurek and Rachela Micmacher. The women were taken to the Szkolna slave labor camp where they worked as slave laborers in an Austrian-owned armaments factory. It was there that they met Wladyslaw Misiuna. Wladyslaw was appalled by the way the Germans were treating Jews.

Sara Marmurek, Rachela Micmacher, and three other young women were assigned to the rabbit farm to feed and care for the rabbits. Despite the risk to his life, Wladyslaw provided Sara and the other women with food, clothing, medicine, and the will to live. When Rachela contracted a severe skin infection and was on the verge of no longer being able to work – a death sentence – Wladyslaw infected himself so that he could get medicine, which he shared with Rachela. He wrote them poems as a way to cheer them up and to instill in them the need to survive. Wladyslaw later recalled, “These young Jewish women and I lived like a family.”

When the Szkolna camp was liquidated on July 25, 1944, Wladyslaw was in the field collecting grass for the rabbits. When he returned to the rabbit farm, he learned that all the Jews from the Szkolna camp, including the five young women, were sent by train to Auschwitz, arriving in mid-August 1944. By then most of the Jews arriving in Auschwitz were immediately sent to the gas chambers. Sara, Rachela, and the other women had been protected and fed by Wladyslaw for more than a year and were in relatively good condition when they arrived in Auschwitz. They all survived selection and were admitted into the camp. On November 12, 1944, the five women were transferred to the Ober-Altstadt slave labor camp, a sub-camp of Gross-Rosen.

Not long after the Szkolna camp was liquidated, Wladyslaw was denounced to the Germans. The SS arrested him and took him to the same lice-infested wooden horse barracks in which the Jewish slave laborers had lived. Though he was scheduled to be executed, Wladyslaw managed to escape. He remained in hiding until Radom was liberated on January 16, 1945.

In early May 1945, Sara, Rachela, and the others were liberated by the Soviet army. All five of the young women survived, thanks in large part to the help, support, and hope that Wladyslaw provided.

Wladyslaw and Sara were reunited at the JFR’s Annual Dinner on November 30, 2010. They had not seen each other since 1945. The 2010 documentary retelling their story can be viewed here.