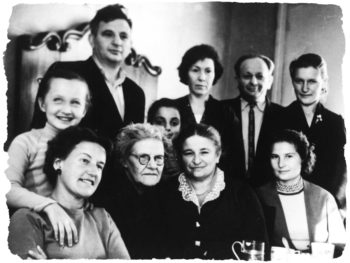 Kovno, Lithuania… 1941 – In 1941, Halina Mosinskiene, a French teacher, was a young mother with one baby and a second on the way. She lived with her husband, a successful engineer, on the outskirts of town. By this time, the Jews in Kovno had been herded into the ghetto.

Sonia Gink, one of Halina’s classmates, escaped from the ghetto and begged Halina for help. Halina, without asking her husband, agreed and made Sonia her housekeeper. In order to avoid any suspicion from neighbors, Halina put an ad in the local paper advertising for a housekeeper. With Halina’s help, Sonia managed to obtain false papers.

Halina and her husband helped other members of Sonia’s family. First came Dr. Meyer Gink, Sonia’s brother, then his wife and son, and Bat Sheva Taborisky. Then came Sonia’s girlfriends Bela and Sarah Finkelbrand. They all found temporary shelter at Halina’s until a more secure hiding place could be found. Sonia stayed with Halina for more than three years and was treated like a member of the family.

In 1944, when the Russians liberated the area, the Mosinskises were afraid of the Communists and escaped along with the Jews. They were in a displaced persons camp until they settled in Brazil.

Halina Mosinskiene passed away in July 2004.