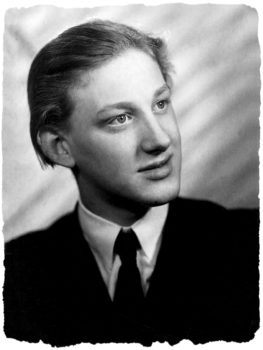 Copenhagen, Denmark… October 1943 – In the spring of 1943, the Danish people stepped up their resistance to the German occupation, which began in April 1940. Labor strikes and acts of sabotage intensified. On August 28, 1943, the German military commander in Denmark declared a state of emergency and commanded the Danish government to institute martial law. The Danish government refused to comply and resigned. The presiding Nazi official, Werner Best, saw this as an opportunity to begin the deportation of the Danish Jews.

Georg Ferdinand Duckwitz, a German official stationed in Denmark, leaked the news of the pending deportation to Danish leaders, who informed the Jewish community. On September 29, 1943 – the eve of Rosh Hashanah – the chief rabbi of Denmark entered the Great Synagogue in Copenhagen, announced the plans for the deportation, and told the congregants to leave immediately and go into hiding. The arrests were set to begin on October 2, but they would not be successful. The people of Denmark – members of the resistance, church leaders, students, policemen, physicians, ordinary citizens – spontaneously came together to thwart the operation. Preben Munch Nielsen, a high school student from Snekkersten, a fishing village north of Copenhagen, was among those who participated.

Preben had joined the resistance as a courier in 1940, and he quickly became involved in the rescue operation. A policeman came to his door and asked him to pick up several Jews at a nearby train station and escort them through the woods to the shore. They would be smuggled by boat across the Øresund, the narrow body of water between Denmark and Sweden. Preben completed this mission and joined the “Friends of the Sound,” a group of Danes based in Snekkersten that coordinated the secret crossings to Sweden. A neutral country, Sweden had agreed to accept the fleeing Jews and encouraged its citizens to welcome them.

The “Friends of the Sound” used the Snekkersten Inn as their headquarters. Many Jews hid at the Inn or in nearby homes before being brought to waiting boats. Preben and his friends worked with local fishermen to take up to twelve Jews at a time across the four-mile stretch of water. In less than a month, they ferried some 1,000 Jews to Sweden. Wanted by the Gestapo, Preben fled to Sweden in November 1943. He returned to Denmark when the war ended in May 1945.

One of the rescue boats used by “Friends of the Sound” is on display at the U.S. Holocaust Memorial Museum.