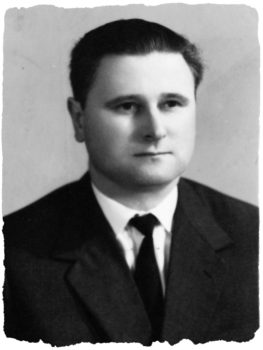 Blizyce, Poland… April 1942 – In April 1942 when Jerzy Noszkowski was fourteen years old, he was walking in the fields outside of Blizyce when he came across a Jewish boy, sick and starving. The boy, who was Moshe Rozenbaum, begged Jerzy to hide him. Jerzy took the boy back to his family’s farm and asked his parents, Franciszek and Elzbieta, if the boy could stay. His parents agreed to let the child stay and gave him a Christian name, Heniek. People in the town thought he was a Polish child from Warsaw.

In 1944 some children learned that Heniek was actually a Jew, and it became too dangerous for Heniek to stay in Blizyce, so Jerzy took him to Grodnek. After Jerzy and Heniek arrived in Grodnek, they were caught in a round-up and taken by the Germans for forced labor. They lived in barracks with other workers. Jerzy helped conceal Heniek’s true identity. They worked as forced laborers until they were liberated in January 1945.

After liberation, Jerzy lost touch with his Jewish friend. There were thirteen members in Moshe’s family. Moshe was the only one who survived. Jerzy and Moshe were reunited in 2000.

Jerzy Noszkowski passed away in April 2011.