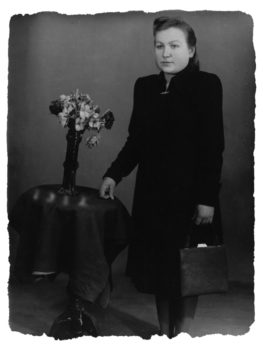 Szarkowszczyzna, Poland… July 1942 – The Nomkin family owned a farm in Szarkowszczyzna, Poland (now Belarus).  The head of the family was the mother, Gita.  She had 13 adult children and several grandchildren.  The Nomkin family was friends with their neighbors, the Olszewski family.  Mr. Olszewski had died a year before the war broke out and his wife, Teodora, was left with five children.

When the ghetto was liquidated in July 1942, eight members of the Nomkin family fled to the woods.  Bela fled with her younger sister, Chaya, and Martin Nomkin.  They hid in the forest for a while until they decided to separate.  Chaya went to the Glebokie ghetto, where she was later killed.  Bela Kluvut and Martin Nomkin remained in the forest.  Martin was trying to join a Jewish partisan group.

Because of partisan activity, the Germans bombed the forest.  Martin and Bela escaped and made their way to the Olszewski farm. When they arrived at the farm, they discovered that other members of Martin’s family were already hiding there.  The Olszewski family was hiding Martin’s brother, Hersch, and Hersch’s daughter, Mikhalina.  A few days later, Martin and Hersch were reunited with two other siblings and their spouses, who also sought shelter from the Olszewski family.

In the summer of 1943, some members of the Nomkin family decided to join a Russian partisan group.  The rest of the family remained in hiding with the Olszewski family until they were liberated by the Soviet army in July 1944.  After the war, the Nomkin family moved to Vilna and then immigrated to Israel.  Bela and Martin married.  With their help, three of Teodora’s daughters moved to and studied in Vilna.