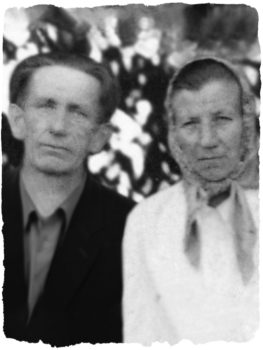 Zawadka, Poland… July 1942 – Frieda Tepper Gersten was a peddler and traveled throughout southern Poland. She lived in Frysztak, Poland, with her son, Leon, and her parents, Yitzchak and Necha Tepper. The Teppers took care of Leon while Frieda traveled. Frieda’s husband, Yonasan Gersten, was living in Rzeszow, Poland, as he was unable to find work in Frysztak. Shortly after Germany invaded Poland on September 1, 1939, Frieda returned to Frysztak to be with her parents and son. Her husband remained in Rzeszow.

In July 1942, the Germans ordered all Jews in Frysztak to assemble in the marketplace. That day some 1,600 Jews, mostly the elderly and the children, were rounded up, taken outside of town, killed, and buried in a mass grave. Included in this Aktion were Frieda’s parents, Yitzchak and Necha Tepper. Shortly after the Aktion, Frieda decided she needed to find shelter outside of the ghetto. She traveled to the countryside and went to families who had purchased goods from her, seeking shelter. After going to a number of homes and being turned away, she approached Maria and Stanislaw Polziec and asked if they would provide shelter for her, her son, Leon, her sister and brother-in-law, Celia and Herman Wiesenfeld, and their son, Moshe. Maria and Stanislaw, even though they had five children, Czeslaw, Janina, Wladyslawa, Wanda, and Genowefa, and barely had enough food for their family, agreed to take in the five desperate Jews.

Disguised as non-Jews, Frieda and the four other members of her family left Frysztak on foot and made their way to the Polziec farm in Zawadka. A shelter was made for them in the attic. This is where they remained for the two years they were living with the Polziec family. Czeslaw, being the only son and the second oldest child, assumed many responsibilities for taking care of the Jews in hiding. Czeslaw brought them food and stood guard should a neighbor or strangers come to the farm.

An earthen bunker was built near the base of the ladder to the attic should the farm be raided. The Jews would run down the ladder and enter the bunker. Czeslaw and his father, Stanislaw, would then move a big grain storage bin over the opening to the bunker. One night the farm was raided. The Jews ran down the ladder escaping into the bunker. Hearing the footsteps, the collaborators asked Stanislaw who was running. Stanislaw said it was his children who were staying in the attic. They did not believe him and they mercilessly beat Stanislaw. The Jews could hear the screams and cries from the Polziec family. But they did not betray the five Jews who were hiding in the earthen grave. The Polziec family could have sent Frieda, Leon, and the Wiesenfelds away – they did not. The Polziec family hid the five Jews for more than two years, until the area was liberated by the Soviet army in July 1944.

Maria and Stainslaw Polziec died years ago. Czeslaw is in his 80s and lives in Mielec, Poland.

In 2013 the JFR reunited Czeslaw Polziec with Leon Gersten. The documentary retelling their story can be viewed here.