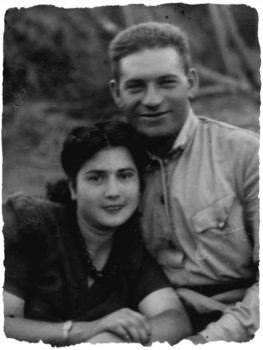 Turkova, Ukraine… February 1942 – Right before the liquidation of the ghetto, Zinaida and her mother learned of the upcoming deportations. They escaped and began searching for food and shelter. They did not have any success in finding shelter until they approached Volodimir Prikhodko and his family, who had been their neighbors before the war.

The Prikhodko family built a bunker for the two Jewish women to live in. As the persecution of the Jews increased, it became too dangerous for the women to stay in the shelter during the day. The family built a temporary hiding place in the forest. Every morning, before dawn, Volodimir led Zinaida and her mother to the forest and every night, after dark, he brought them back to his home. On the days that it was too dangerous for the women to return to his house, he brought them food and water in the forest. In 1944, Volodimir’s father provided Zinaida and her mother with false identity papers. They moved to a village where nobody knew they were Jews and were able to pass as Christians for the remainder of the war. After liberation, Zinaida and her mother moved to Israel.