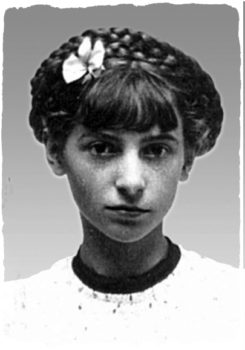 Krakow, Poland… Fall 1943 – In 1943, Miroslawa Przebindowska was fourteen years old and lived with her mother, Helena, and her sister, Urszula, in a two-room apartment in Krakow, Poland. In the fall of 1943, Mirolsawa’s aunt, Salomea Kowalczyk, brought to their apartment a very ill Jewish teenage girl, Anna Allerhand. Salomea asked them to hide the girl for a few days until false papers could be obtained.

Salomea, who had three sons, had been hiding Anna in a shed on the outskirts of Krakow. She was unable to keep the girl as she was afraid of being denounced, which is why she turned to Helena and her daughters. The terrible conditions in the shed, where Anna was hiding, and the worsening weather contributed to the deterioration of Anna’s health.

When Anna arrived at the home of Helena, Miroslawa, and Urszula, she required not only a safe hiding place but needed immediate medical attention. Lacking Aryan papers it was impossible to admit Anna to the hospital without attracting suspicion and bringing danger to Miroslawa and her family. Helena approached a pharmacist claiming she needed medicine for one of her daughters. With the care of Helena and Miroslawa, Anna regained her health. The family had grown close to Anna and they decided that she could stay with them despite the danger. If they were caught hiding a Jew, they would all be killed.

During the winter of 1944, the family was forced by the city administration to share their apartment with a family of strangers, and the chance of being denounced became even greater. Anna’s living space became even more limited as she often needed to squeeze into a makeshift hiding place.  Going to the bathroom required the help of both Miroslawa and Urszula so this new family would not know Anna was being hidden in the apartment.

The streets of Krakow continued to see enforced police hours, frequent raids, and unannounced visits by the Germans. The family secured false baptism papers for Anna from a priest who was a family friend. Anna’s name was changed to Maria “Marysia” Malinowska. Anna stayed with Miroslawa and her family until the end of the war.

There were a number of close calls, including one where Anna and the sisters had to convince Nazi officers that they were all Polish Catholic girls.

After the war, Anna was reunited with her brother, Alexander, who was on Schindler’s list, her sister, Roza, who was hidden by a Polish farm family, and her father who was a Polish POW. From Anna’s immediate family, only her mother died. The sisters left for Israel in 1945 and were joined by their father and brother later.

Helena and Urszula died years ago. Miroslawa is in her 90s and continues to live in Krakow.