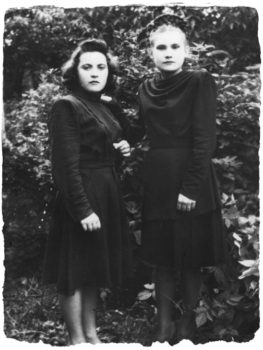 Kharkov, Ukraine… October 1941 – In October 1941, the Germans occupied Kharkov, Ukraine.  The Pustova family had to move out of their house because the street on which it sat became part of the Jewish ghetto.  The police allowed the Pustovas to continue using the shed in their former home, and the family kept food and other supplies there.

One day, Maria Pustova’s father, Stepan, went to the shed to retrieve some food and came upon Rebecca and her daughters, Inna and Maja, three residents of the recently built ghetto.  They were starving and freezing.  Stepan gave them some food and decided to continue to help this family.  He arranged for his daughters, Maria and Larisa, to smuggle food to Rebecca and her daughters.

One day, the police prohibited further visits to the ghetto. Maria and Larisa begged a policeman to let them pick up some documents from their old house.  They were allowed to enter the ghetto, and on the way out they smuggled Inna from the ghetto.

The sisters continued to bring food to Rebecca and Maja, at great risk to their own lives.  The Jews inside the ghetto were also in grave danger. There were daily executions.  Rebecca and Maja managed to escape from the ghetto and from Kharkov.

Maria and her husband were forced to move as their neighbors learned of their aid to the Jews.  Before leaving, they told Inna, who was hiding in Kharkov, their new address.  Within weeks, Inna soon came to their new home seeking shelter and the Pustovas once again did not hesitate to protect her.  Neighbors reported them to the local police and Inna fled.  Maria’s husband was later arrested and sent to a concentration camp.

After the war, Maria Pustova moved to Lvov, Poland.  Maria was reunited with Inna and Maja after liberation.  Rebecca also survived the war but has long since passed away.

Maria Pustova passed away in November 2009.