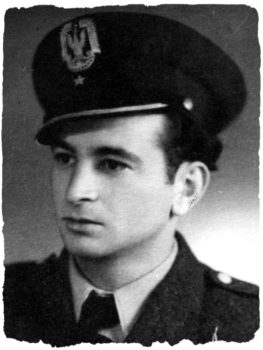 Auschwitz, Poland… 1940 – Shortly after World War II began in September 1939, Jerzy Radwanek, a pilot in the Polish air force, was assigned to a secret intelligence mission. The Gestapo learned of the operation and arrested Jerzy before it was launched. In the fall of 1940, he was deported to Auschwitz.

Although it would become the deadliest killing center during the Holocaust, Auschwitz began as a prison for Poles who opposed the German occupation of their country. Construction on the first part of the camp began in May 1940 when the Germans converted Polish army barracks near the town of Oswiecim, 37 miles west of Krakow, into a concentration camp. It would become known as Auschwitz I.

When Jerzy Radwanek arrived at Auschwitz I in the fall of 1940, he worked with other Polish inmates to establish a secret military organization inside the camp. They planned escape routes and documented atrocities committed by the Germans. Jerzy was given the job of a camp electrician and was able to move around the grounds more freely than most other inmates. On several occasions, he was sent to the Jewish barracks to repair wiring and install lights. He was deeply disturbed by the plight of the Jewish inmates and decided to do whatever he could to help them. Despite the dire circumstances he himself faced, Jerzy felt a responsibility to ease the suffering – or at least to try – of the Jews imprisoned with him.

Often Jerzy would purposely cause a short circuit in a Jewish compound so that he would be called in to fix it. On such occasions, he smuggled food and medicine in his toolbox. When the guard’s attention wandered, Jerzy distributed the items to the Jewish women and young people. He was caught more than once and severely beaten for offering this aid. Jerzy befriended several of the women whom he visited, and he promised that if he survived he would tell the world of the brutality and suffering he witnessed. The Jews who came to know Jerzy called him the “Jewish Uncle” of Auschwitz. Jerzy was a prisoner in Auschwitz from May 1940 until the camp was liberated in January 1945.

Jerzy Radwanek passed away in 2001.