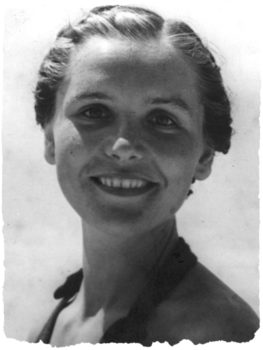 Zagreb, Yugoslavia… 1942 – After Germany and its allies invaded Yugoslavia in April 1941, the Germans and Italians created the fascist puppet Independent State of Croatia in the northern part of the country. Shortly after the invasion of Yugoslavia, eight-year-old Dan Stockhammer from Nova Gradiška (now in Croatia) learned that his father and uncle had been captured as war prisoners. Later that year, Dan and his mother were sent to a concentration camp. Dan’s maternal grandfather was able to arrange for the boy’s escape. Dan was then brought to Banja Luka where his paternal grandfather and some other relatives lived. Unfortunately, Dan and his relatives were arrested soon after. After Dan and his grandfather were released, arrangements were made for Dan to go to the home of Olga Rajsek in Zagreb. Olga, a Christian, was the fiancée of Dan’s imprisoned uncle, Zlatko Neumann. Distraught about Zlatko’s fate and Dan’s safety, Olga sought to do what she could to help. She took Dan into her home and hid him for months.

Around neighbors, Olga passed Dan off as her cousin. However, one of Olga’s neighbors was an officer in the pro-Nazi Ustashe regime. His wife was from Nova Gradiška and recognized Dan. They reported him to the authorities, and Dan was arrested again. Olga pleaded for Dan’s release. After little success, she approached Bishop Alojzije Stepinac, the head of the Catholic Church in Croatia, who had begun to publicly criticize the regime’s policies against the Jews and the Serbs. Stepinac intervened and was able to get Dan released from prison.

After Dan’s release, Olga placed Dan in an orphanage for the children of partisans. Olga continued to care for Dan, bringing him food every day and taking him to her home on weekends. The neighbors who had denounced him had moved away, but Olga pretended that Dan was the child of a partisan just to be safe. The boy often asked for his mother, who had been killed months earlier in a concentration camp.

When the war ended in the spring of 1945, Olga took Dan from the orphanage and brought him back to her house. Dan’s father and uncle were released from prison. Dan was reunited with his father. Olga Rajsek and Zlatko Neumann, Dan’s uncle, were married.

Olga Rajsek passed away in August 2008.