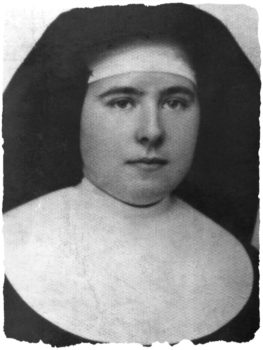 Przemysl, Poland… 1939 – A year before Germany launched World War II, Sister Alfonsja became the director of an orphanage in Przemysl. She was nineteen years old. Born Eugenia Wasowska, she became a nun as a result of a vow her father had made when she was thirteen. The young girl was struck by a horse and buggy and seriously injured. Her father promised God that if his daughter lived, she would enter a convent. Eugenia recovered, and after finishing high school, she became a nun. She took the name Sister Alfonsja. Because of her love for children, she was assigned to a Catholic orphanage in Przemysl.

Soon after the war started, Sister Alfonsja began to take in Jewish children. “Maria” was one of the first. One day Maria showed up at the front door of the orphanage. When Sister Alfonsja opened the gate, Maria whispered through her tears, “My name is Maria.  I am Catholic. Please take care of me.” Sister Alfonsja noticed a young couple watching the girl from the edge of the woods near the orphanage. She immediately let her in. “Maria” was in fact Hedy Rosen, and the couple at the edge of the woods were her parents. Pretending to be Polish, Hedy’s mother found work as a washwoman in a nearby village. She would come to the orphanage in the middle of the night and leave food for the children by the gate.

Despite the danger and the daily struggle to provide for the children in the orphanage, Sister Alfonsja took in thirteen Jewish children. There was never enough food or medicine, and she often had to beg for rations. The orphanage was unheated, and water had to be brought up from a well. Human waste was collected in buckets, which then had to be emptied. In addition to providing shelter for the children, the orphanage saw to their schooling. Since Sister Alfonsja had pledged to take in only Catholic children, she had to keep the true identities of the Jewish children unknown to the priests who oversaw the local church. She treated the Jewish children as if they were Catholics. They attended mass along with the others and were taught that if a German asked them what they wanted to be when they grew up, they should say a nun or a priest.

In the spring of 1944, as the retreating Germans moved out of eastern Poland, Sister Alfonsja brought the thirteen Jewish children to the Jewish community in Przemysl, of which there were only 300 survivors. In 1950 she left the convent and returned to her original name, Eugenia Wasowska. She immigrated to Australia in 1960. In 1980, she went to Israel and was reunited with eight of the thirteen children she saved.

Eugenia Wasowska passed away in Australia in 2010.