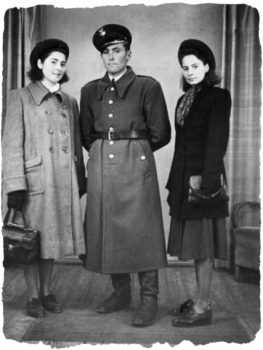 Stara Huta, Poland… 1941 – Jacob Wexler owned a mill that was located on the farm of Florian and Maria Weglowski in the village of Stara Huta, Poland (now Ukraine). Because it was too far for Jacob to travel each day from where his family lived in Ludwipol to the Weglowski farm in Stara Huta, Jacob moved into the Weglowski home with his wife, Chana, and daughter, Mira. Florian and Maria had three children, Helena, Leonia, and Stanislaw.

When the war broke out in 1939, the area was first occupied by the Soviets. In June 1941, Germany invaded and life changed for the Wexler family. In late summer 1941, Jews from Ludwipol and the surrounding villages, including the Wexler family, were forced into the newly created Ludwipol ghetto.

In August 1942, the Germans began the liquidation of the Ludwipol ghetto.  Jacob Wexler was killed by the Germans in an Aktion on August 24, 1942. Chana Wexler decided their only chance of survival was to flee the ghetto. Chana, Mira, and Jacob’s brother, Joseph, escaped from the ghetto. They ran across the bridge to the woods on the outside of town and made their way to the Weglowski farm. The Weglowski family took in Mira and Chana. Joseph had already smuggled his wife out of the ghetto; he joined her where she was hiding with Florian Weglowski’s brother, Franciszek.

After the war, Chana and Mira went to Brazil. Joseph and his wife, along with Sam and Sylvia, went to Canada. The Russians forced the Weglowski family to leave their home in Stara Huta.

Maria, Florian, and Leonia Weglowski died years ago. Stanislaw Weglowski passed away on November 23, 2020. Helena is in her 90s and lives in Ilawa, Poland.

The JFR reunited Helena with Mira at its annual dinner on December, 1, 2014. The documentary retelling their story can be viewed here.