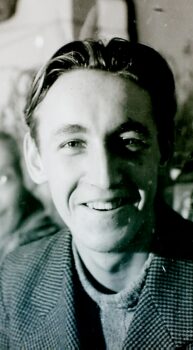 Milanowek, Poland… August 1944 – Felicja Witkowska, a widow since 1928, lived with her two adult children, Aniela and Ryszard, in a town outside of Warsaw. The family ran the town’s only photographic studio which was located next to the railway station. Ryszard was a member of the Armia Krajowa, the Polish Home Army, which was the Polish military resistance organization in Poland during the war.

In 1943, the Germans conducted a search of the Witkowski home. While they found nothing, Felicja and Aniela were arrested and taken to Pawiak Prison in Warsaw. Ryszard managed to free his mother and sister who had suffered terribly while in prison. As Ryszard wrote in his testimony to Yad Vashem, “There they met, with no mediation, the cruelty of the Nazi terror machine… My mother and sister’s time in Pawiak prison left a sustained mark on their psyche.”

In early August 1944, a stranger came into Felicja’s shop. He was in his twenties and was wearing rags. While alone in the shop with Felicja, he told her that he was an escapee from Pawiak prison and that he was looking for help. Felicja, without hesitating, promised to help him. She did not change her mind when the stranger, named Roman, told her that he was a Jew.

The family decided that Roman would be hidden in the photography studio. They arranged a safe place where he could sleep and he would take meals at their home. Having escaped from Pawiak, Roman had no identity documents. Ryszard contacted the Armia Krajowa documentation cell and obtained false documents for Roman.

At the same time, Milanowek was flooded with Polish refugees from Warsaw, as the Warsaw Uprising had begun August 1, 1944. Roman, now with false papers, well-dressed, and clean shaven, was able to leave the photography studio and go into town and mix in with the refugees. He continued to spend his nights in the studio.

As the front was coming closer, it was decided they needed a safer hiding place for Roman. Ryszard and Roman dug a bunker under the shop floor. In the autumn of 1944, when the first frosts came, Roman left the unheated shop and moved into the Witkowski home where another hiding place was created.

One day, after a trip into town, Roman brought two young Jewish men to the Witkowski family, Jozef and Bronislaw Miodowski. They were Jews who were mixing in with the Polish refugees from Warsaw. Despite the risk, the Witkowski family took in the two young men. Roman, Jozef, and Bronislaw stayed with Felicja, Aniela, and Ryszard until Milanowek was liberated by the Soviet army on January 17, 1945.

After the war, Bronislaw left for France and Jozef went to the United States. Roman left Poland and settled in Germany.