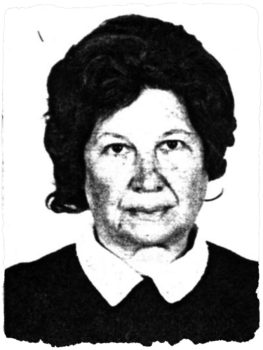 Kiev, Ukraine… Fall 1941 – Isaak Brodski, a Jewish man, worked in a kiosk in Kiev.  In June 1941, after Germany attacked the Soviet Union, Isaak enlisted in the Soviet army. In September of that year, the Germans captured his unit; he was interned in a POW camp from which he escaped. Isaak made his way back to Kiev. When he arrived in Kiev, he was told that his wife and children had been evacuated to the East and that the Jews of Kiev were being killed.

He sought out Vladimir and Pelageya Savitski, customers from the kiosk, and asked if they would give him shelter. The Savitski family asked Nataliya Tkachenko and her nieces Lyudmila Zavorotnaya and Ioanna Yevgenyeva to assist in hiding Isaak. Both families opened their homes to Isaak and he would go from one home to another depending on the circumstances.

In 1942, Nataliya’s home was denounced and searched, but Isaak escaped.  Lyudmila convinced the police that no Jew had been hiding there. A few days later, Isaak reappeared, and both families continued to hide him. Ioanna would bring Isaak food and helped him move between the homes.

Fearing for their safety, the Savitski family moved with Isaak to a new neighborhood in Kiev and obtained false papers for him. Feeling secure, Isaak began to venture outside. Isaak was recognized and denounced. Isaak, Vladimir and Pelageya Savitski, and Nataliya Tkachenko were arrested. Vladimir was sent to Germany to a forced labor camp. Nataliya and Isaak were sent to the Syrestski concentration camp, which was located on the outskirts of Kiev. Isaak was imprisoned in Unit 1005, which was tasked with burning the bodies of those murdered at Babi Yar.

In the summer of 1943, the prisoners in the Syrestski camp attempted an escape. Isaak managed to survive and lived to see the liberation of Kiev. He testified before the Soviet commission during the investigation of Nazi war crimes in Kiev. He rejoined the Soviet army in 1944 and died in Poland.

After the war Isaak Brodski’s wife returned to Kiev and sought out those who helped save her husband so she could thank them.