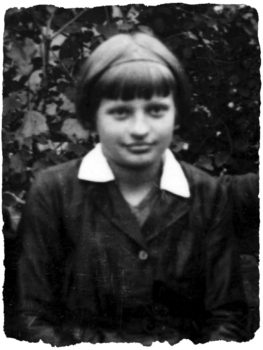 Swieciany, Poland… September 1941 – In September 1941, less than three months after Germany invaded, all the Jews from Swieciany, Poland (now Lithuania), and its neighboring villages – 8,000 men, women, and children – were rounded up by the Germans and taken to the Polygon Woods where most were brutally murdered and buried in a mass grave. Jews who were deemed “useful” by the Germans were sent to a slave labor camp. Golda Bushkanietz and her husband, Szymon, were among this group.

In early 1943 the Germans ordered the liquidation of the slave labor camp and divided the remaining 300 Jews of Swieciany into two groups. One group was told they were being deported to the Vilna ghetto, the other group to the Kovno ghetto. Golda and Szymon escaped the deportation.  Later they learned that both groups were taken to Ponar, a mass killing site outside of Vilna, and were immediately executed.

Szymon ran to the woods to join the partisans. Golda fled to Swieciany and sought a hiding place. She went to the Walulewicz family. Michal Walulewicz had been the mayor of Swieciany before the war. Golda’s father knew Michal. Golda did not know the family well, but she thought perhaps they would help her.

When Golda arrived at the Walulewicz home, she found Zofia Walulewicz and her seventeen-year-old daughter, Irena, who was deaf and mute.  Zofia and Irena immediately took Golda in despite the difficulties they faced.  Irena’s older brother had been killed by the Germans in 1941.  In 1942, after the Jews of Swieciany had been murdered, the partisans killed a German officer in Swieciany.  The Germans retaliated by ordering their Lithuanian collaborators to round up fifty leaders of the community – all Christians.  Michal Walulewicz was among the fifty who were marched to the Jewish cemetery where they were murdered and buried in a mass grave.

During the day, Golda hid in the attic. Everyday Zofia and Irena brought up food for Golda and came back to take the plate and to empty the bucket that served as her toilet. During the winter, Golda slept in the kitchen where it was warm.

One day a neighbor denounced Zofia and Irena. Golda escaped through a window and returned after the Germans had left. Golda often hid under Irena’s bed or in the pigsty to avoid capture. Despite the risk, Zofia and Irena would not send Golda away.

In 2007 the JFR reunited Golda Bushkanietz and Irena Walulewicz. The documentary retelling their story can be viewed here.