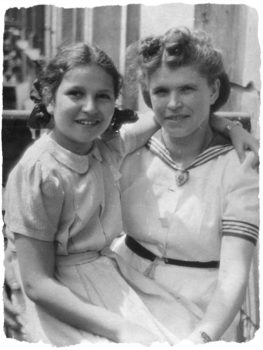 Lvov, Poland… 1941 – The Germans occupied Lwow, Poland (now Ukraine), on June 30, 1941, and immediately began killing thousands of Jews. Wiktoria Skrzypiec had worked for Hanna Sachs’s grandfather and knew the family. When it became clear that the Sachs family was in danger, she took Hanna to her home near Krakow, Poland, where she would be safer. Wiktoria’s mother took care of Hanna so Wiktoria could return to work in Lvov.

One day Wiktoria spotted Iza, Hanna’s aunt, as Iza was being marched with other Jews from the Lvov ghetto to a forced labor assignment. Wiktoria marched along with the group and grabbed Iza out of the line. She brought her to her apartment for a bath and change of clothes. Wiktoria then took Iza to Warsaw where Iza’s brother and sister were passing as Poles. Iza obtained false Aryan papers, and worked in Warsaw for the rest of the war.

As the front came closer, Wiktoria returned to her home in order to be close to Hanna. After liberation, Hanna was reunited with her mother, who had survived.