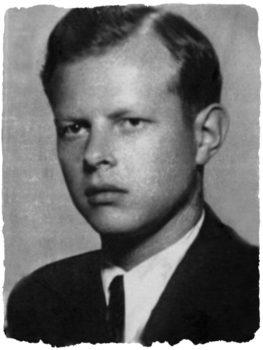 Warsaw, Poland… 1943 – In 1943, Ella Zlotnik and her father were both using false papers to pass as Aryans in Warsaw. Although they were both living outside of the Warsaw ghetto, they were not able to live together. Ella lived with a Christian family while her father lived in an apartment.

In 1944, the Gestapo discovered Ella’s father’s identity and arrested him. Because it was no longer safe for Ella to use her false papers, she was forced to go into hiding until she could obtain new documents. Both feats would have been nearly impossible without outside connections. Ella Zlotnick knew that she could count on her childhood friend and neighbor at this desperate time. Jerzy Sliwczynski and his family had lived on the same street as the Zlotnicks in Mlawa, Poland, before the war began. Although they had lost touch over the years, they became reacquainted in 1943 when Ella began studying with Jerzy’s sister.

Jerzy risked his life to secure Ella new papers and temporary shelter in a little village. She stayed there until it was safe for her to return to Warsaw. At that time, Jerzy was also helping other Jews without receiving any financial compensation.

When Ella returned to Warsaw, Jerzy and his parents opened their home to Ella and accepted her as a member of their family. She stayed with them through the August 1944 Warsaw Uprising and left Poland after liberation.