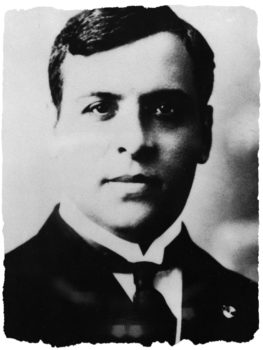 Bordeaux, France… May 1940 – On May 10, 1940, Germany invaded France and swiftly advanced south through the country. Many of the Jews living in France fled south. Most sought to enter Spain, proceed to Portugal, and then escape by ship. In order to cross the French border into Spain, the refugees needed Portuguese entry or transit visas. On the day the Germans launched their invasion of Western Europe, however, the Portuguese government instructed its consular representatives in France not to issue such visas, especially not to Jews. This left thousands of refugees stranded in Bordeaux.

One night, Rabbi Haim Kruger from Belgium, one of thousands of refugees trying to escape, approached Aristides de Sousa Mendes, the Portuguese consul general in Bordeaux, and begged him to issue visas to the more than ten thousand Jews who had fled to the area. Sousa Mendes agreed to give visas to the rabbi and his family, but said that he could not give out any more without his government’s approval. Rabbi Kruger refused to accept the offer. After much soulsearching, Sousa Mendes decided that he would issue visas to all those who needed them, even though he would be risking his career and his life. As the Germans continued their push into southern France, he began to issue transit visas to Jews, defying the orders of his government.

Sousa Mendes issued thousands of visas before the Germans reached Bordeaux. His wife, Angelina, took care of those who were ill, elderly, or pregnant, and his two oldest sons assisted him in preparing the visas. When German planes bombed Bordeaux on the night of June 19, 1940, many of the refugees fled to Bayonne and Hendaye, French towns closer to the Spanish border. Sousa Mendes followed and instructed the Portuguese consul in Bayonne to issue special visas to the Jews. At Hendaye, he led the refugees to an obscure border crossing and persuaded the Spanish guard to let them through.

Even after the German army entered Bordeaux on June 27, 1940, Sousa Mendes continued to issue Portuguese passports to Jews who were still stranded there, knowing that such documents might prevent these Jews from being deported to concentration camps. His disobedience again angered the Portuguese government. Sousa Mendes left Bordeaux on July 8 and returned to Lisbon, Portugal. He was dismissed from the diplomatic service and was denied retirement and severance benefits.

Aristides de Sousa Mendes died in poverty in 1954 and was survived by his wife and twelve children.