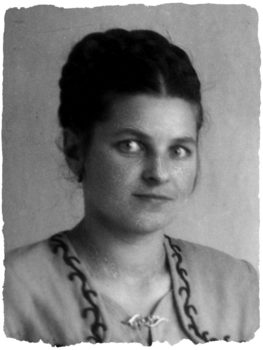 Before the war, Turka had a population of 10,000 – half Jewish and half Christian. Among the Jews were the Seiferts – a large family who had lived in Turka for generations. Upon receiving the order that Jews must report to the Sambor ghetto, the Seiferts held a family meeting. The family knew they had to do everything they could to save as many people as possible.  Mendel Seifert, whose wife had died in childbirth, lived with his six-year-old daughter Rozia and his mother. Before the Jews had to move to the ghetto, Mendel’s mother was rounded up in an Aktion and killed in a mass execution in the Turka Jewish cemetery.

A group of Jews from Turka had built a bunker in the nearby woods and equipped it with food and some small weapons. To stay in the bunker each person had to be able-bodied and capable of protecting themselves. Unfortunately, not everyone in the Seifert family qualified. Mendel’s brother’s wife, Fanya, had a wooden leg; her son, Lucien, and Mendel’s daughter, Rozia, were too young. Mendel’s wife had died in 1939 and he agreed to move to the ghetto with Fanya, Lucien, and Rozia. The rest of the family went into the bunker.

Because Jews were only allowed to bring one suitcase per person into the ghetto, Mendel and his family began to sell their furniture. When Wiktoria Jaworska’s mother, Anna, along with her two eldest children, came to look at the furniture, she saw Rozia and Lucien. Anna asked Mendel what was going to happen to the children. He said they were going to ghetto – they had nowhere else to go. Anna turned and spoke with her children, Mikolaj and Olga, and said to Mendel, “We will take care of you.  You will come with us.”

The next night Wiktoria’s brother, Mikolaj, returned to the Seifert home with a cart full of hay. He hid the four Jews under the hay and took them several kilometers away to the Jaworski farm in a neighboring village. The Jaworski family consisted of Anna, whose husband had died several years earlier, and six children, Mikolaj, Olga, Wiktoria, Helena, Antonina, and Aniela. Mikolaj dug an underground bunker in the barn where Mendel, Fanya, and the two children hid for the next two years, coming out only on rare occasions. Each day Wiktoria and her family brought food to the Seiferts and carried away their body waste. While the Jaworska family had very little, they shared what they had with Rozia and her family.

There were several close calls. Wiktoria had given her identity documents to her Jewish neighbor. Months later she was denounced and two German officers and a Ukrainian policeman came to the Jaworska farm and arrested Wiktoria. Although she was interrogated by the Gestapo for days, she never betrayed her neighbor or the Seiferts who were hiding in the earthen bunker in the barn. Wiktoria was finally released by the Gestapo when she convinced them that she had not given her identity papers to a Jewess.

In the summer of 1944, as the Soviet army was approaching Turka, the Germans came through the area confiscating animals, taking food, and searching for both deserters and hidden Jews. Wiktoria and her mother moved the Seiferts to the woods, where they lived for two weeks until the region was liberated by the Soviet army. Mendel, Fanya, Rozia, and Lucien returned to Turka and found devastation.

Of the 5,000 Jews of Turka, only forty-seven survived. Everyone in the bunker had been denounced and murdered. As a result of the courage and bravery of Wiktoria and her family, Mendel, Fanya, Rozia, and Lucien were the only surviving members of the Seifert family. After the war Mendel married Fanya and the family moved to the United States. Rozia met an Israeli, they married, and moved to Israel. She now goes by the name Shoshana, which is Hebrew for “rose” the same as her name in Polish.

Wiktoria Jaworska passed away in January 2017.

In 2008, the JFR reunited Rozia Seifert and Wiktoria Jaworska Sozanska. The documentary retelling the story can be viewed here.