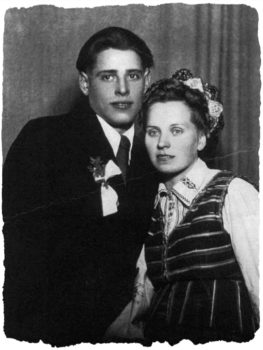 Ona Urbonas and her husband, Bronius

Kovno, Lithuania…1943 – Yerachmiel Siniuk had lost his arm in an ammunition storage bunker where he worked as a slave laborer. Now disabled, he was about to be killed by the Germans. Yerachmiel’s brother-in-law, while on a work detail outside of the ghetto, had a chance meeting with Andrius Urbonas, a farmer, and begged him to hide Yerachmiel. Andrius said if Yerachmiel managed to reach his farm, the Urbonas family would hide him.

Yerachmiel escaped from the Kovno ghetto and made his way to the Urbonas farm. Andrius, his wife, Maria, his twenty-year-old daughter Ona, and fourteen-year-old son Juozas, warmly welcomed Yerachmiel. They fed him and made a place for Yerachmiel in the barn. The Urbonas family was extremely poor and had barely enough food for themselves. Yerachmiel approached Andrius with the idea of the family hiding more Jews. This way they could all pool their meager resources and perhaps be able to purchase more food. After all, Yerachmiel said, if the Germans caught Andrius hiding one Jew or five Jews, the penalty would be the same – death. Andrius agreed to take in additional Jews.

Yerachmiel went back into the ghetto where he met Yitzchak Fein and made arrangements for Yitzchak, his wife, and two children to leave the ghetto and escape to the Urbonas farm. Once the Fein family was safely in hiding with the Urbonas family, Yerachmiel went back into the ghetto and came upon Henry Kacenelenbogen whom Yerachmiel knew from before the war. Henry was desperate to escape from the ghetto with his wife and eight-year-old nephew who had just escaped the Children’s Aktion – the round-up of the remaining children in the Kovno ghetto.

Each time Yerachmiel brought another family out of the ghetto, the Urbonas family made the hiding place bigger. Ona brought food each day to the now eight Jews in hiding. She also washed their clothes. Juozas and Andrius would bring them news from the front lines. At first the Jews hid in the barn, then they moved to the house and were hidden in an earthen hole under a piece of furniture.

As Yerachmiel wrote in his testimony to Yad Vashem, “All the attention of this noble family was directed toward us, and they tried in every way they could to help make our lives in the barn easier.”

They stayed with the Urbonas family until they were liberated by the Soviet army on August 1, 1944.

In 2001 the JFR reunited Ona Urbonas with Yerachmiel Siniuk and Henry Kacenelenbogen. The documentary retelling their story can be viewed here.