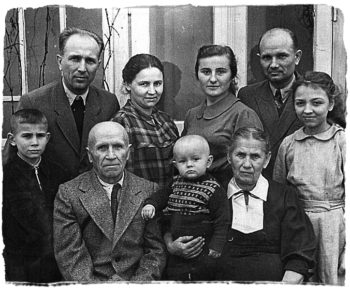 Rukhtsa Singer and her daughter, Nechama, survived the first Aktion on the ghetto. On the eve of the final Aktion, Rukhtsa and Nechama escaped from the ghetto and fled to the woods where they lived for a short time. The driving snow and cold forced Rukhtsa to seek shelter. She approached the Vavrisevich home and asked for help. Nikolai and Mikhail urged their parents to take them in and gave Rukhtsa and Nechama warm, dry clothes. Five other Jews were already hiding in the house when they arrived.

The winter of 1942-43 was very severe.  Prior to Rukhtsa and Nechama’s arrival, the other Jews were moved from the shed, to the house, to the forest, depending on the circumstances. Nikolai and Mikhail decided to build a more secure shelter, one which would be difficult for the Germans to discover should they raid the house.

The brothers built a small earthen bunker under the house. During the course of the war, the Vavrisevich family hid fifteen Jews, each a stranger to the family. Nechama and her mother fled the safety of the bunker in February 1944, fearing discovery by the Germans as the Soviet army approached the area. The remaining Jews stayed in the bunker until the Soviet army liberated them later that year.

During the German occupation of Ukraine, the Germans periodically selected Ukrainian men and women to be taken as forced laborers to Germany. When Nikolai and Mikhail received their notice to report, there was a family discussion, which included the Jews in hiding. What to do — should the brothers report or go into hiding? The brothers decided to report and take their chances; not reporting would have put the fifteen Jews in danger as the Germans would come looking for the brothers. Mikhail was selected by the Germans and was sent to Germany to work in a forced labor camp. He was a forced laborer for more than eighteen months and remained in Germany until after the end of the war.

Mikhail passed away in April 2011.  Nikolai is in his 90s and continues to live in Vladimir-Volynsk.