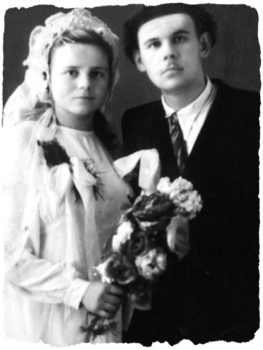 Romanivka, Ukraine… 1942 – When the Germans occupied Tarnopol, Poland (now Ukraine), in 1941, Bronia Felberbaum and her parents, Sophie and Jacob, were taken to the ghetto in Velyki Birky. Jacob knew many Christian families in Velyki Birky and was able to make contact with Helen Balyk. Helen promised to hide the family on her parents’ farm, provided the Felberbaums were able to get there.

One day the Gestapo officer for whom Bronia’s mother worked as a maid told her the ghetto would be liquidated that night. He allowed the entire family to spend the evening at his home. The next day, the Germans burned the ghetto to the ground, killing everyone inside. Those who tried to escape were shot.  Sophie, Jacob, and Bronia left the officer’s home in the middle of the night.

After hiding for almost two weeks in different barns, Sophie, Jacob, and Bronia Felberbaum reached the farm of Helen’s parents, Franciska and Josef Balyk. The Balyk family hid and cared for the Felberbaums. Josef built a hiding place next to the stable. The Balyks’ daughter, Lucia, and granddaughter, Vira, would bring food to the family each day. It was not easy for the Balyks to obtain food, but they never let Bronia and her parents go hungry.

After liberation, Bronia’s family moved back to Tarnopol, which became part of Ukraine. Immediately after liberation the borders were open, but Jacob refused to leave the Balyks. They had become family.

Following Jacob’s death in 1958, Bronia and her mother left Ukraine as part of the repatriation agreement with Poland. In 1960 they came to the United States.

As Bronia wrote to Yad Vashem, “While my parents have died, I am forever grateful to these kind, noble people, who risked everything they had to take in three Jewish strangers, when no one else would.”