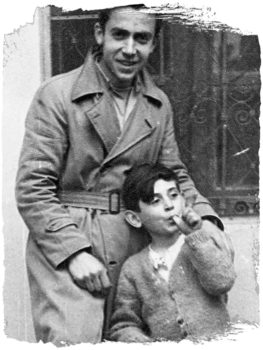 Kruja, Albania… November 1943 – Mosa and Gabriela Mandil were professional photographers who lived in Novi Sad, Yugoslavia (now Serbia). When the Germans invaded in April 1941, Mosa and Gabriela and their two children, Gavra and Irena, fled south to the Italian-controlled province of Kosovo. Being Jewish, they were caught and imprisoned in the city of Pristina from October 1941 until May 1942. While in prison, Mosa volunteered to take photographs of the Italian soldiers, thereby winning their favor. The Italian soldiers allowed the Mandils to escape to Italian-occupied Albania.

Once in Albania, the Mandils settled in Kavaja. In the summer of 1943, learning of the impending German takeover of Albania, the Mandil family moved to the Albanian capital of Tirana, hoping to find safety. Mosa found work in a local photography studio. Around the same time, 25-year-old Hamid Veseli, who came from a devout Muslim family, left his mountain village of Kruja and went to Tirana to open a clothing store. Hamid’s younger brother, Refik, came with him and found work as an apprentice in the photography studio, where he met Mosa Mandil.

From November 1943 until liberation in October 1944, the Veseli family sheltered the Mandil and the Ben Joseph families in a small room above their barn. While the adults had to remain hidden, seven-year-old Gavra Mandil and five-year-old Irena Mandil were dressed as Muslim villagers, allowing them to live openly in the village. Despite the many hardships, the entire Veseli family took care of the daily needs of the seven Jews they were hiding.

After the war, the Mandils returned to Novi Sad, where they reopened their photography studio. In 1946, Refik Veseli joined the Mandil family in Novi Sad to complete his training with Mosa Mandil. The Mandils immigrated to Israel in 1948 and the Ben Josephs moved to Brazil.

Vesel Veseli and his wife died years ago. The Jewish Foundation for the Righteous provided financial support to Hamid, Refik, and Xhemal. Refik Veseli died in 2000 and Hamid Veseli died in 2009. Xhemal will be 91 in December 2020.