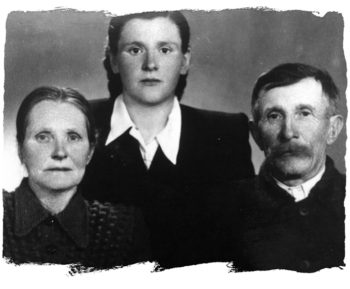 Zlogty, Poland… September 1941 – When the Germans entered Soleczniki, Poland (now Lithuania), just outside of Vilna, in June 1941, they ordered all Jews to report for forced labor. On the eve of Rosh Hashanah, the Germans began the liquidation of the Jews of Soleczniki.

Saul Leyman had been visiting his friends, three brothers – Gedalya, Herschel, and Gershon Schneider – when a Christian woman warned them about the pending Aktion. She told them to run since the Germans had come for the Jews. Saul and two of the Schneider brothers, Gedalya and Herschel, fled deep into the forest and hid there.

Realizing that they could not remain in the forest, they decided to approach the Voroniecky family, who lived in Zlogty, and ask for their help. The mother, Maria, had worked for the Schneider family before the war. Maria and Jozef Voroniecky and their four teenage children, Viktor, Zofia, Bronislawa, and Helena, welcomed the three men. The family dug a hole – an earthen grave – in the floor of their barn where the men could hide. The men learned from Viktor that their families had been massacred. Days later, Gershon arrived at the farm and reported that all the Jewish men had been forced to dig a mass grave in the forest. While he was digging, a policeman hit him with a rifle and told him to dig faster. At that moment, Gershon decided to escape.

One night a German came to the Voroniecky farm and accused them of hiding Jews. He took Viktor into the barn, threw him to the ground, and beat him with a rifle while yelling, “You are hiding Jews.” Viktor withstood the severe blows, refusing to betray the four Jewish men who were hiding a few feet away under the floor of the barn. The Voroniecky family treated Saul, Gedalya, Hershel, and Gershon as if they were family. They protected them for three years and provided for their every need.

When the Soviet army liberated the area in the summer of 1944, Saul, Gedalya, Hershel, and Gershon left the Voroniecky home. The men returned several months later to build a new house for the Voroniecky family – it was their way of saying thank you. During this time, a Polish partisan came to the farm and found Gedalya. As he was about to kill Gedalya, Viktor ran from the barn and killed the partisan. When the neighbors discovered that Viktor had killed the partisan to save a Jew, they came and severely beat Viktor and his father and attacked the three sisters. The Jewish men took the entire Voroniecky family with them to Vilna.

Viktor died in 2002, Helena in 2004, and Bronislawa in 2017. Zofia is in her 80s and continues to live in the same area where they hid Saul Leyman and the Schneider brothers.

In 2000 the JFR reunited Zofia Voroniecky with Saul Leyman. The documentary retelling their story can be viewed here.