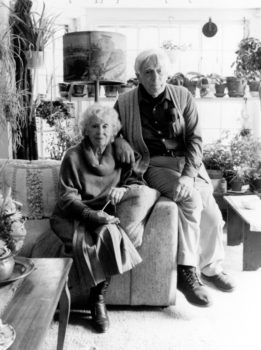 Laren, the Netherlands… 1942 – “It just happened.  First we were asked to keep some valuables for a friend who was going into the ghetto.  We were amazed to find out that he was a Jew.  Then we were asked to take a child.  Then we became more involved with the underground; we had to make a decision: Do we do this, go on with this?  That’s the moment when we made the decision.  Holland was like a family and part of that family was in danger – in this case, the Jewish part.  The Germans were threatening our family.  We weren’t thinking.  What shall we do?  We just did.”  This is how Aart Vos reflected on his and his wife’s efforts to save Jews during the Holocaust.

The first who came to the Vos’s home were Nap and Alice de Klijn, well-known musicians. Nap and Alice remained with Johanna and Aart until a more secure hiding place could be found. Aart built a secret tunnel where the Jews hid when the Germans raided the house. Their friend was the chief of police and would warn them when a raid was planned.

One little girl, Moana Hilfman, stayed with the Vos family for the duration of the war. During the course of the war, Aart and Johanna hid 36 Jews in their home.