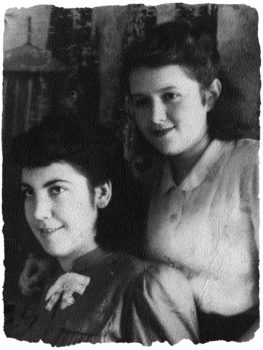 Kirovograd, Ukraine… August 1941 – Upon entering Kirovograd, the Germans immediately began to raid the homes of Jewish families. When SS officers entered Alla Granovsky’s home she hid behind the door of a room. She narrowly escaped – but her parents were arrested and never heard from again.

Fearing that the Germans would return, Alla left her home with no food, no clothes, and nowhere to turn. Shortly after her escape, she encountered Zinaida Zhilenko, a childhood friend and classmate. Alla told Zinaida about the fate that had befallen her parents. Without hesitation, Zinaida offered to take Alla to her home, which was on the outskirts of Kirovograd.

The Zhilenko family had seen the notices distributed by the Germans throughout Kirovograd: “The penalty for harboring enemy soldiers, partisans, or Jews – Execution.” Though they knew the risk they were facing, they readily agreed to take Alla into their home. Zinaida and her parents strived to conceal Alla’s presence and kept it a secret from their neighbors. In spite of food shortages, the Zhilenko family shared the little that they had with Alla.  They treated her as if she was family.

After spending the winter and spring with the Zhilenko family, Alla acquired a forged passport that identified her as Galina Tkach. Concerned that she could be recognized as a Jew in Kirovograd, she moved to another town where she passed as a Christian. Alla was eventually picked up by the Germans and taken to Germany for forced labor but because of her forged papers, she was never identified as a Jew.  Due to the help of the Zhilenko family, she survived the war.

Zinaida is in her 90s and still lives in Kirovograd.