The JFR hosted a luncheon for all rescuers living in Warsaw, Poland, on Sunday, September 3, 2017.  Each rescuer was invited to bring a guest. Many of the rescuers brought their children and grandchildren. JFR Board President, Roman Kent, welcomed everyone in a very moving speech.

Marian Turski, Chair of the POLIN Museum Council and Roman’s boyhood friend, also spoke. (Below is a photo of Marian Turski with JFR Executive Vice President, Stanlee J. Stahl.) Dan O. Hastings, the new Cultural Affairs Officer of the U.S. Embassy in Poland, and Ruth Cohen Dar, Deputy Chief of the Mission of the Embassy of Israel in Poland, gave remarks. 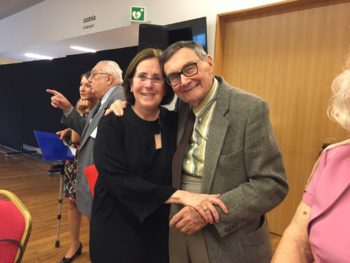 It was a wonderful afternoon.  For the rescuers, it meant that they were able to get out and be recognized for their noble deeds during the Holocaust. For the JFR, we were able to see old friends and to catch up on how everyone is doing.  Some 100 people attended the luncheon.

The JFR has been hosting a luncheon for rescuers living in Warsaw for a number of years.  During the luncheon we celebrated the birthdays of two rescuers. The JFR provided each rescuer with funds to cover the cost of a taxi to and from the luncheon.

To read the stories of the rescuers pictured to the left, please click on the following links:
Krystyna Jakubowska
Marianna Gajowniczek
Anna Stupnicka Bando

On October 8, 2017, the JFR is co-sponsoring a major teacher education program with the U.S. Embassy and POLIN. The two-day program, “How to teach about the genocide?” will be held at POLIN. The main focus of the program will be the methodology of research and education about the Holocaust. The JFR is covering the cost of Professor Peter Hayes to present at the program on Monday, October 9, 2017. It is expected that some 400 teachers from across Poland will attend the program.  I am looking forward to seeing a number of our Alfred Lerner Fellows from Poland at the program.  See next month’s At the JFR for photos and a follow-up report.

Consider bringing the JFR’s traveling exhibit Whoever Saves a Single Life…Rescuers of Jews During the Holocaust, to your community, please e-mail Stanlee Stahl at [email protected].  The exhibit opened at the United Nations in January 2013. The exhibit is perfect for small venues e.g., libraries, community colleges, museums. For more information on the exhibit, please click here.

The JFR is pleased to be part of the Combined Federal Campaign (CFC) this year. The CFC is the Federal government’s workplace charity campaign and covers all civilian, postal, and military employees. The CFC’s campaign season is September 1st through December 15th. If you know of someone who works for the Federal government, the U.S. military, or the U.S. Postal Service, please ask them to consider selecting the JFR as the recipient of their gift. The JFR’s CFC number is 10744.

Many companies offer matching gift programs to encourage employees to contribute to charitable organizations. Most of these programs match contributions dollar for dollar, and some will even double or triple the amount of your gift. Please check with your employer to see if your company matches.