Each rescuer is being contacted to see how they and their families are doing.  Several rescuers live in the eastern part of Ukraine where the fighting is heavy.  The family of Alexander S. fled from Kherson to Western Ukraine.  Alexander will be 92 in June.  Below is an email from his daughter, Lyudmila.

Hello,
We, our family, are now in western Ukraine in the Ivano-Frankivsk region, in the village of Kukilniki. We miraculously escaped from the bombings. We fled in what we were wearing. We left everything at home, took only documents, cards and a computer. We are now safe 1,000 km from Kherson. Now me, dad, my husband, my husband’s mom and our 18 year old grandson are here. We were taken in by my husband’s sister. They are very kind and warm-hearted people. We are very grateful to them! How long we will live here, we don’t know, we don’t know whether our house will remain intact in the Kherson region under the occupation. We will not return home until our territory is no longer occupied.

To read about other Ukrainian rescuers and their status, please click here.

THANK YOU TO DMITRI ZOLOTKOVSKY

Every organization should be so lucky to have a volunteer like Dmitri Zolotkovsky!  Dmitri answered our appeal for a Ukrainian/Russian speaker.  And we are so fortunate!  Dmitri has spent countless hours emailing and calling each of the JFR-supported rescuers in Ukraine multiple times.  He checks on them to see how they are doing, he provides each rescuer with the information they need to receive their funds at Western Union, and he follows up with each rescuer and their family to confirm that they received their funds.  Dmitri, originally from Kiev, now lives in New York City.  Dmitri through his tireless work these past weeks, has enabled the JFR to keep its commitment to take care of the Righteous in their time of need, as we are doing today in Ukraine.

The JFR has been partners with Western Union since 1992. We use Western Union to transfer funds to all rescuers with the exception of those living in Poland and the United States. We would not be able to do our work without their support.  Western Union has been instrumental in helping the JFR send its funds safely to rescuers in Ukraine. We are especially appreciative of the assistance Mr. Fernando Delas Carnevali, Director, Global Product, has provided to the JFR these past 30 years.

On May 8, 2022, we will commemorate VE Day – Victory in Europe.  Please consider showing JFR’s award winning documentary Following the Footsteps of My Father.  Here is a link to the documentary.

If you would like to screen the longer version of the documentary, Footsteps of My Father please email Stanlee at [email protected] and we will make it possible for you to screen the documentary with your students. The longer version is 38 minutes in length.  Stanlee is also available to “meet” with your students online to discuss the making of the documentary, Master Sgt. Roddie Edmonds, and the historiography of the Battle of the Bulge.  The Teachers Guide for “Footsteps of My Father” is available on the JFR website.  Here is a link to the Teacher’s Guide.

Master Sgt. Roddie Edmonds
A screenshot of some of the 2021 Summer Institute for Teachers participants.

Our 2022 Summer Institute got off to an early start!  We have been Zooming with our 2022 Lerner Fellows.  It is a great way for everyone to “meet” each other prior to arriving at the Hilton Newark Airport the end of June and to discuss topics of interest to the group.

This Wall Garden represents individual rescuers that the students in my 8th grade Holocaust class researched using the JFR website.  I wanted them to understand that it only takes one person to do the right thing and when many people do the right thing so many lives are saved. 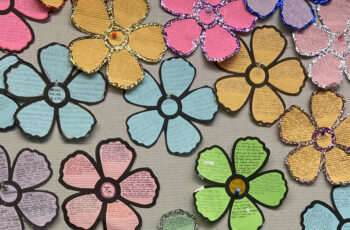 JFR Lerner Fellow, Tricia Skelton (2017) and Goldman Awardee (2019), shared with us a project she does with her students each March.  Tricia is a history and ELA teacher at Opelika Middle School in Opelika, AL.

March Madness is in the air! Each year, I host our own version of March Madness with BOOKS! All of my students submit their top 3 favorite novels and I whittle the list down to the Sweet 16. As the basketball games progress, so does our book competition. The Elite 8, Final Four, and Semi Finals all lead to the BIG moment, the Book Champion. This year our final two books were Blended by Sharon Draper and Crossover by Kwame Alexander. It was a close game with only a few “points” separating the two. In the end, Crossover won the game. Lots of brackets were busted early, but a few came out on top!

In our April 2022 eNewsletter, we featured Johanna Susanna Halpern.  Johanna was from the Netherlands and came to the United States where she settled in New Jersey.  Johanna, who went by the name, Susanna, died on her birthday, April 7, 2022.  She was 99.  Here is a link to Susanna’s rescue story.

Ryszard Witkowski, a Righteous Gentile from Poland, passed away on March 14, 2022, at the age of 95. Ryszard was a pilot in the Polish Air Force.  In tribute to Mr. Ryszard Witkowski, at his funeral, there was a fly over of planes and helicopters.  Photos from Mr. Witkowski’s funeral are included. You can read Ryszard’s story here.

May the memory of Susanna Halpern and Ryszard Witkowski be a blessing.

The dates for the 2023 Advanced Seminar are January 14 – 16, 2023.  We are planning on an “in person” program.  The 2023 Advanced Seminar, will be held at the Hilton Newark Airport.  The program will be announced by September 2022.  The program is open to Alfred Lerner Fellows who are full-time teachers or Holocaust center education staff.  It will be good to be with everyone again in person!

POLISH SOCIETY FOR THE RIGHTEOUS

The JFR would like to recognize the important work of the Polish Society for the Righteous. The Society, which is head by Dr. Anna Stupnicka Bando, is based in Warsaw, Poland. Here is a link to Anna’s rescue story. For almost thirty years, the JFR has been working closely with the Polish Society for the Righteous. Over the past two decades, the Society has helped the JFR reach out to JFR-supported rescuers living in Poland.