The JFR hosted a luncheon for all rescuers living in Warsaw, Poland, on Sunday, September 3, 2017. Each rescuer was invited to bring a guest. Many of the rescuers brought their children and grandchildren.  JFR Board President, Roman Kent, welcomed everyone in a very moving speech.

Marian Turski, Chair of the POLIN Museum Council and Roman’s boyhood friend, also spoke. Dan O. Hastings, the new Cultural Affairs Officer of the U.S. Embassy in Poland, and Ruth Cohen Dar, Deputy Chief of the Mission of the Embassy of Israel in Poland, gave remarks.

It was a wonderful afternoon. For the rescuers, it meant that they were able to get out and be recognized for their noble deeds during the Holocaust. For the JFR, we were able to see old friends and to catch up on how everyone is doing. Some 100 people attended the luncheon.

The JFR has been hosting a luncheon for rescuers living in Warsaw for a number of years. During the luncheon we celebrated the birthdays of two rescuers. The JFR provided each rescuer with funds to cover the cost of a taxi to and from the luncheon. 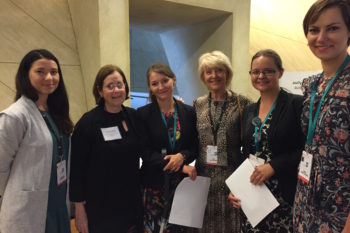 To read the stories of the rescuers pictured to the left, please click on the following links:
Krystyna Jakubowska
Anna Stupnicka Bando
Marianna Gajowniczek

On October 8, 2017, the JFR is co-sponsoring a major teacher education program with the U.S. Embassy and POLIN. The two-day program, “How to teach about the genocide?” will be held at POLIN. The main focus of the program will be the methodology of research and education about the Holocaust. The JFR is covering the cost of Professor Peter Hayes to present at the program on Monday, October 9, 2017. It is expected that some 400 teachers from across Poland will attend the program. I am looking forward to seeing a number of our Alfred Lerner Fellows from Poland at the program. See next month’s Lerner Fellows eNewsletter for photos and a follow-up report.

The 2018 Advanced Seminar is closed. If you are interested in attending, please send me your application, with center sign-off, and we will place you on a waiting list. Please do not send any money. If you are accepted into the program, then we will request your participant fee at that time.

We have started planning for our 2018 Summer Institute for Teachers. The 2018 program will be held Sunday, June 24 through Thursday June 28, 2018, at Columbia University. If you know someone who should be nominated to attend the program, please have them contact their JFR Holocaust Center of Excellence. To our Centers, it is not too early to start recruiting for the program. Applications will be sent out in November.

Teachers at the 2017 Summer Institute for Teachers.
JFR's Traveling Exhibit on Rescue.
Exhibit on display at the United Nations.

If your center has not already done so, you may consider bringing the JFR’s traveling exhibit Whoever Saves a Single Life…Rescuers of Jews During the Holocaust, to your community please e-mail Stanlee Stahl at [email protected].  The exhibit opened at the United Nations in January 2013. The exhibit is perfect for small venues and is appropriate for many community venues, e.g., libraries, community colleges, museums. There is a minimal fee for centers to rent the exhibit. Centers must also cover the shipping of the exhibit and insurance. For more information on the exhibit, please click here.